Nowadays every business wants to make their presence online in all possible ways, be it in the form of a website or a mobile application. Since, now every other person possesses a mobile phone or computer, applications are getting of great use as they are easy to access and use on daily basis. One gets personalised content, instant updates and offline accessibility.

Have you thought about it?

Have you ever noticed how many apps are installed in your phone? 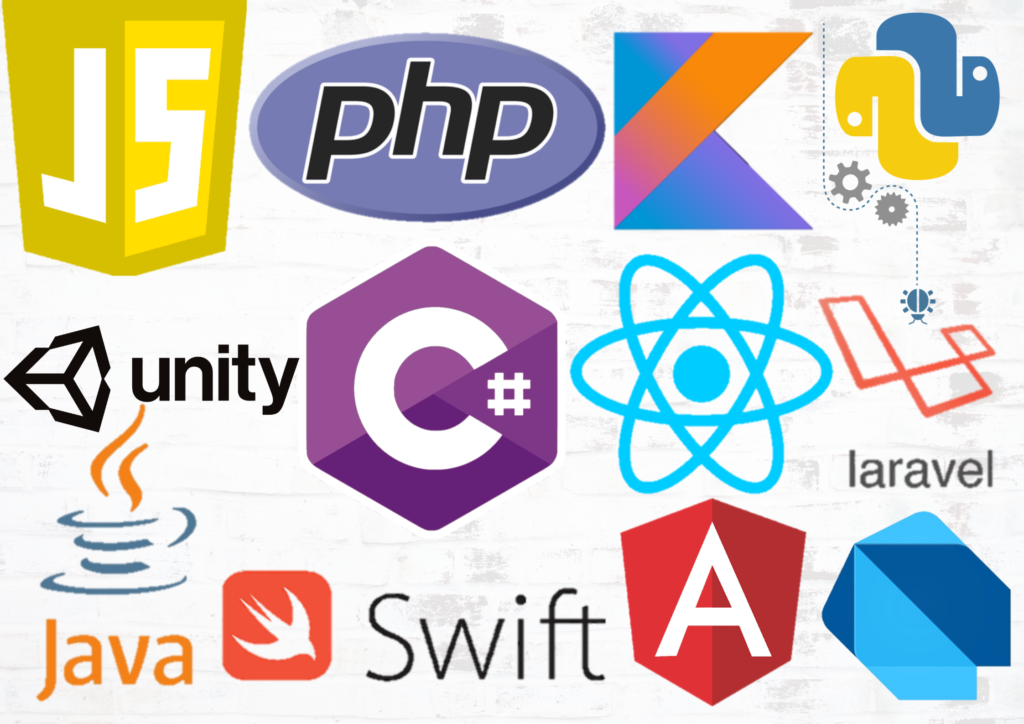 Factors needed to be taken care of before choosing a language-

Broadly Apps can be classified into two types of Apps: –

A web app is a software or program which is accessible using any web browser. Web apps are built using the most popular programming languages, but they can’t be sold in any app store. For E.g., Google docs, Pixlr.com, etc.

ReactJS is a frontend library, a toolkit for building user interfaces developed by Facebook. It allows developers to build complex user interfaces which have components that would change frequently over time. It is easy to adopt, extremely competent and SEO- friendly.

AngularJS is an open-source Model-View-Controller framework developed by Google. Its main objective is to help develop single-page applications. It allows for an immediate synchronization between the view and the model. Also, it saves time as this framework automatically strings the code together.

Python is the most famous and known language among the people. It has huge collection of standard libraries with easier integration with other languages. It has better code readability and is also compatible with machine learning, IOT and data science.

PHP or hypertext pre-processor is one of the most recommended programming languages for mobile apps. It is an interpreted language which does not require a compiler and can run on every operating system. It is very much secured as a server- side scripting language.

A mobile application or a mobile app is a software program that is designed to run on specific hardware called tablets and smartphones. When you press an icon on your mobile device, such as an iPhone, Android phone or a tablet, these programs get executed.

Mobile Apps can be bifurcated into two types of apps: –

Native mobile apps are dedicated to one specific platform, whether it’s Apple iOS or Google’s Android. As native apps are developed specifically for the platform, it can operate more quickly and intuitively. For E.g., WhatsApp, Facebook, Gmail.

Swift is one of the primary languages which is used in the development of iOS. It has surpassed Objective C as the preferred language for iOS app development. It is very readable, type-safe language and highly interactive. It uses automatic memory counting technology which helps to manage memory and garbage collection.

Java is one of the most popular programming languages in the world. It is for Android development and has rich open-source libraries. It supports multi-threading, automatic memory allocation and garbage collection.

Kotlin is a newer programming language created by Google and is a great alternative to Java. It is a statistically typed programming language used for developing modern Android applications. It is clean and concise language which generates compact, simple and cleaner code as compared to Java.

A hybrid app is a mix of native and web apps. It is the creation of a single app that can run on multiple operating systems including Windows, Android and iOS. A hybrid app can be installed on a device like a native app, but it technically is a web app. For E.g., Instagram, Uber, Amazon.

Java script is the most preferred and leading language. It is one of the best cross-platform app development. It is a versatile and flexible language so there is plenty of room for variation. React Native is a popular JavaScript-based mobile app framework that allows you to build natively-rendered mobile apps for iOS and Android. It lets you create an application for various platforms by using the same codebase.

Dart is a programming language developed by Google. It is used with Flutter to build mobile apps. The big benefit of building apps with Dart and Flutter is that it is cross-platform. It means that you can build an app with just one code base instead of building two separate apps for iPhone and Android. Flutter is a mobile app SDK, complete with framework, widgets, and tools, that gives developers a way to build and deploy mobile apps, written in Dart.

C sharp (C#) is a general-purpose, object-oriented and modern programming language developed by Microsoft. It can be used to create various types of applications, such as web, windows, mobile applications. It is used in game development in Unity. Unity is a cross-platform game engine which means your applications made with Unity can live on multiple platforms.

So, I hope the reading was insightful, just in case you missed it- this is for you. The apps can be divided into two types- Web apps and Mobile apps. Further Mobile apps can be classified into two parts namely, Native apps and Hybrid apps. Now according to the bifurcation there are many programming languages in the market but which is the best for you depends upon your project requirements. Whether it’s for Desktop, iOS or Android, one has plenty of options to choose from. Always consider your requirements, popularity and reliability of the language before choosing. I hope the examples provided will help your programming language selection easy.

Prev PostReact.js Unit Testing with Jest
Next PostOnline Education, Work from Home: Have We Arrived in Virtual World?